The Evolution Of Edible Cutlery 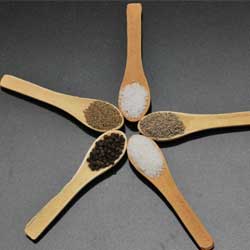 As the world tackles the problems of pollution, many innovative solutions like edible cutlery are coming to the fore to try and minimise the impact our lives are having on the world.

One contributor to the widespread pollution problem is something many of us probably use without appreciating the consequences: disposable plastic cutlery.

Whether the cutlery is used for eating a workday lunch or for barbeques and picnics, the reality is many billion plastic cutlery pieces end up in landfill or pollute our oceans every year. Now there is potentially a novel solution to this problem: edible cutlery.

Who came up with the edible cutlery idea and why?

Back in 2011, Narayana Peesapaty, founder of the company Bakeys, started the production of edible cutlery (spoons) after he became concerned about the overuse of plastic cutlery in his native India; more than 120 billion plastic utensils are discarded in India every year.

His idea was to make the spoons edible so that the spoons could become part of the meal, rather than being discarded at the end of it. Indeed, as stated by the company founder, the spoons can absorb the flavours of the meal and, therefore, they can contribute to the taste experience. In this way, edible cutlery is not only an eco-friendly solution, but it is also a healthy and tasty one.

But minimising pollution was not the sole reason behind the entrepreneurial idea: Peesapaty was also concerned about the chemicals that are present in plastic cutlery and the harm these chemicals may cause humans as the potential carcinogens and other chemicals leach out of the plastic. His edible spoons, in contrast, are made from plant-based ingredients, with a little added salt for flavour.

How is the edible cutlery made?

Production of the edible cutlery like spoons takes place in a factory in Hyderabad, India which employs nine local women. To make the spoons, three different grains – flours of jowar (sorghum or great Millet), rice and wheat – are used. Sorghum is the main component because it is a hearty, abundant crop that requires far less energy for cultivation compared with other grains, such as rice or corn.

Once the three flours are blended together, they are mixed with a small volume of water and then a special method is used to knead the dough. The dough is simply baked at very high temperatures, in moulds, and then the spoons are packaged in odourless paper envelopes, ready for the consumer. There are absolutely no chemicals added – no preservatives, artificial colours, or plasticisers. There are also no fat or milk products added.

The spoons can be eaten by vegetarians and vegans, as well as people with lactose intolerance or milk allergy. At just 32 calories per spoon, it is also suitable for anyone worried about their waistline. At present, due to the wheat content, the spoons are not suitable for people requiring a gluten-free diet; however, in the future it may be possible to use gluten-free grains.

What does the edible cutlery look and taste like? 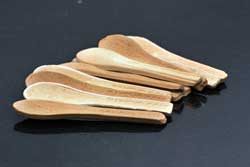 When production first started, the spoons were made in three basic varieties – plain, sweet and savoury – by adding different spices and sweeteners during the manufacturing process. The sweet variety was made with the inclusion of a little sugar while the savoury variety included rock salt, cumin seed, black pepper and ajwain (an Indian spice similar to oregano and anise).

Nowadays, the varieties have become a bit more adventurous and they include sugar, ginger-cinnamon, ginger-garlic, celery, black pepper, cumin, mint-ginger and carrot-beetroot. With the addition of vegetable pulp, the resulting spoons can take on different colours and flavours depending on the choice of vegetable, with these spoons probably being more suited to savoury dishes. There is also the possibility of having more sweet varieties by the addition of vanilla, cardamom or rose water.

How do you use the edible cutlery?

Similar to disposable plastic spoons, edible spoons, are intended for single use, and they can be used to eat a range of foods, from ice-cream through to hot soups and curries. Since the spoons have 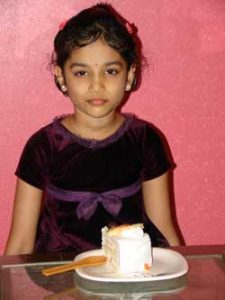 a dry cracker-like texture and flavour they can also be enjoyed dipped in chocolate sauces as well as other sweet sauces, with the sweet varieties, naturally being the most suitable choice here. They
can be used in hot or cold drinks as long as they are not immersed for more than 10 minutes, after which they will become soggy. It is even possible to cut into meat (for example in curries or a stew) so long as the spoons are handled more gently than stainless steel spoons.

Providing these guidelines are followed, the spoon will remain intact until the end of the meal, at which time the spoon may be eaten as a complement to the meal, or it may be discarded into a compost heap, pot plant or some mud, where it will simply disintegrate within four to five days.The edible spoons have a shelf-life of three years when left in their packaged state and in a cool, dry place. Once opened, the spoons should be stored in an airtight container, and they should not be refrigerated.

How much does edible cutlery cost?

The cost of making the edible cutlery so that it is comparable with the cost of disposable plastic cutlery is probably the biggest challenge facing Narayana Peesapaty. At present, it costs two rupee to manufacture each spoon and the Bakeys’ founder is determined to reduce this cost to one rupee, which is more in line with the cost of a plastic spoon. By procuring the raw materials directly from the farmers, Paeesapaty is hoping to reduce his costs. And, once he can increase the scale of production, he hopes to reduce his costs further.

Which countries are using edible cutlery at present? 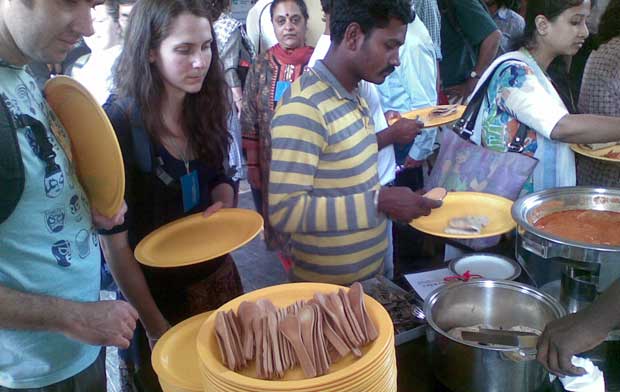 In India, where Bakeys manufacture edible cutlery, 1.5 million edible spoons are sold every year. Although the edible spoons are not sold on a large scale elsewhere currently, the company’s founder has received numerous e-mails, as well as orders, from around the world, showing the worldwide support for the eco-friendly initiative.

To help in his endeavour to scale-up production and to reach customers worldwide, a crowdfunding campaign was launched on Kickstarter in early 2016, with an initial goal of $20,000. As testament to the interest and worldwide support for this initiative the crowdfunding campaign yielded more than 13 times this goal.

Are there plans to make other cutlery items or crockery items?

Yes. Plans are in place to make forks, soup spoons, dessert spoons and chopsticks. And if all of these go well, then the next step will probably be salad bowls, and possibly cups and plates.

Does edible cutlery have a future? And which countries are likely to adopt its use?

Given the ubiquitous use of disposable plastic cutlery, its potential for leaching harmful chemicals into food and, once it is discarded, the problems it creates by polluting oceans and clogging up landfill, an environmentally friendly solution is certainly necessary.

Overuse of disposable plastic cutlery is a problem that is not faced by India alone; most countries face huge problems of producing and having to discard plastic products, such as plastic cutlery, cups and plates. The support shown in Bakeys and its edible cutlery during the crowdfunding campaign reflects the growing number of people concerned about the widespread use and discard of plastic utensils.

Although other types of edible spoons have been produced from alternate grains, such as corn, costs associated with these corn-based edible spoons are still too high and, more importantly, they still contribute to pollution levels since they require high heat to decompose.

Edible cutlery, like those produced by Bakeys, offers a promising ecologically friendly and healthy alternative that reduces plastic pollution and doesn’t harm the environment or wildlife because any discarded edible spoons will decompose in a few days, just like a discarded biscuit.

Once the manufacturing costs for the edible versions become comparable to the costs of the plastic ones, it is likely that edible cutlery, as well as crockery will feature more prominently in our lives in the future in a bid to reduce the amount of plastic pollution the world creates every year.