Have a coffee break

A daily fix of coffee is a must for around 50% of the planet each day and those who live in Finland seem to be the biggest coffee drinkers in the world, although Brazil are the biggest producers of it 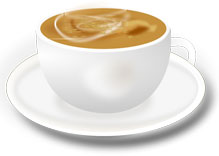 at around 33%. So with this in mind I thought I would do a little research into this drink and how it came to be. This article is best read with a cup of coffee:-) Enjoy!

Where Do The Beans Come From?

The old song claimed that there’s a lot of coffee in Brazil and while that’s still true in its green state, Colombia, Vietnam and Indonesia are catching up. Production of Arabica seeds, probably the original bean, continues in Arab and Asian countries, east Africa and Latin America. Robusta cultivation is concentrated in south-east Asia, central and western Africa and as that song says, in Brazil. Experts seem to agree that the best quality comes from Ethiopia, although Kenya and Colombia are close contenders.

From Harvest to Home and High Street

Growers generally have to wait five years for their first harvest. The beans are actually a fruit, with branches covered in fragile and short-lived white blooms, and the cherry-like fruits that follow being picked throughout the season as they ripen. Berries can be processed by a dry or wet process, with the latter producing a milder drink. Once the seeds are sorted and fermented to remove any remaining pulp, the beans are roasted for varying strengths, ready for storing and eventual transportation.

Roasting turns the green seeds brown and prolongs the commodity’s eventual shelf life. The level dictates the final flavour, with light roasts being sharper. Removing as much caffeine as possible will aid sleep, but some of the taste contained in the caffeine will be lost. 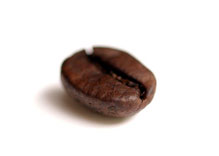 Of the two main types, Arabica is the most common but of course as with wine, its quality and flavour is affected by factors such as location and climate. The more bitter Robusta or canephora is usually blended for espresso or for instant coffee. It’s tougher constitution and higher yield makes it a more economical choice commercially, although some may find its tasteless pleasing.

Coffee Makers, Past and Present

Early preparation methods included infusion and filtering from around 1710. Vacuum brewers were first introduced in the 1840s and continued in popularity until the mid-twentieth century, even boasting a Bauhaus design, although their operation was too complicated for domestic use. The first modern method was probably the drip brew with its filter, which has been around for over 125 years.

For coffee-lovers over a certain age, the gurgling noises of the metal percolator may have provided their first experience of authenticity in the 1960s, although the non-electric kind were first patented during the middle of the nineteenth century in the United States. In the 1970s, the development of the more easily-maintained electric drip coffee makers led to a decline in popularity for percolators.

Italians favour the moka stove-top pot, where pressure forces vaporised water through a layer of ground beans, giving the thicker texture typical of espresso and providing a close domestic alternative to the machines in our coffee shops. This easy-to-operate and attractive model will give you quality without too much effort.

Another easy method for an aromatic drink is the French press or cafetière. As with all filters, it uses coarser grinds that can’t escape into the water. Ground coffee is placed in the base of the container before hot water is added and the plunger pressed down. Cafetières allow you adaptability, as they’re easily transported in mug-sized variations.

For even easier options pop a coffee pod into your machine, fit a filter cup over the top of your mug or try a basic cone-shaped holder with disposable papers. The jars that line supermarket shelves mostly contain freeze or spray dried granules, with powdered or liquid alternatives also available. As well as the advantage of instant preparation for busy consumers, with hot water being poured on to the granules, lower weight makes it an attractive option for distribution. 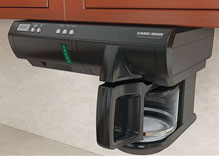 At the other end of the scale, our cosmopolitan way of life today has persuaded us to take food and drink seriously. This is obviously a good thing but before we rush to acquire a complicated coffee maker, it’s worth doing some research and giving it some thought. These machines can top the lists in surveys of items bought but not used, so it’s worth checking that you are buying one that suits your needs.

Of course, your choice depends on personal taste and convenience and any of the above may create coffee heaven for you. The process can be part of the pleasure, while for others speed and convenience is a factor. Real coffee can be too bitter for some, although experimenting with different kinds might help. As with products such as wine and olive oil, a blend or mixture might be cheaper but could lack the intensity of flavour that purists demand.

With all the cafés in our town centres, the choice can be bewildering. The tiny cup of espresso that jump-starts the day can also be added as a shot to a mug of hot water for a Caffé Americano. Steamy froth is essential to a cappuccino, made more delectable by chocolate sprinkles (originally cocoa powder). Once you know that latte is simply Italian for milk, you’ll realise that caffé latte will be creamy. Influence from across the pond has added flat whites, skinny lattes and all manner of concoctions that make the morning or afternoon pitstop more fun.

Some typical cups of coffee are:

This cool info graphic shows you these cups of coffee as well as many more!

Your perfect cup of coffee depends on your preferences so don’t be afraid to customise it. For instance if you fancy a dash of milk in your Americano, go for it. The most important thing is to appreciate the ritual and the moment. Ensure that you can repeat this by storing in an air-tight jar in the fridge because flavour and quality does change after opening.

Don’t Throw It Away!

As a natural product, coffee can be re-cycled or re-invented so your perfect cup can go a long way.

However, it would be hard to beat Russian artist Arkady Kim, whose work The Awakening comprised one million coffee beans, and was unveiled in Moscow’s Gorky Park as the world’s largest coffee bean mural below. 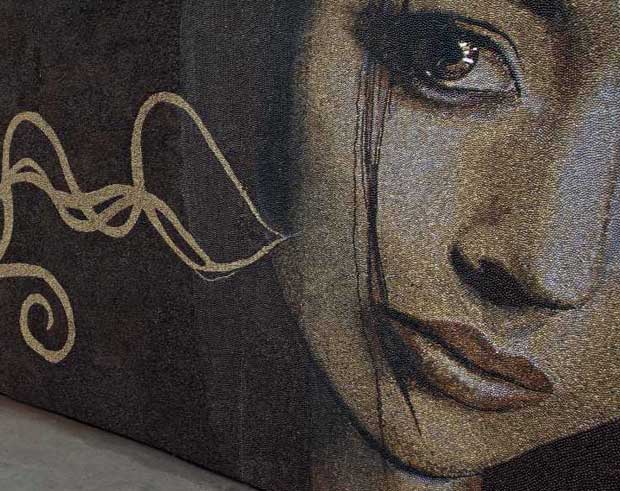 To understand the importance of the perfect cup that you crave, you need to go back to coffee’s origins in Ethiopia in the tenth century or earlier, and forward to fifteenth-century in Yemeni Sufi monasteries for first verifiable reports as a drink, and of its horticulture. The rest is history. As its popularity gradually grew and spread throughout the rest of the world, the coffee houses of the seventeenth and eighteenth centuries becoming the high street chains of today.

(Q) Which of these types of coffee is named after the Italian word for Stained?

Click here to get Google to show you the answer.

The great big English breakfast
The home of tomorrow
The Evolution Of Edible Cutlery
The invention of the pop up toaster
Tags:historycoffeedrinkartbeansmaker

2 thoughts on “Have a coffee break”