The history of chocolate

With more than 7 million tons of chocolate consumed worldwide every year, there’s no doubt that chocolate is an incredibly popular food, with a huge industry behind its supply. But, the humble cocoa bean has a long and interesting history and has been used in a number of quite different forms, before it became the treat that we all know and love today.

What are the origins of chocolate?

The history of chocolate consumption is a long one, and as far as we currently know, its consumption dates back at least as far as 1900 B.C, in Mesoamerica. It was generally only consumed by the upper classes, who made it into a frothy, bitter drink, flavoured with various spices including chilli – a far cry from the sweet treat we know today. Because 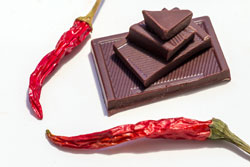 cocoa beans were often used as a form of currency, only the very wealthy could afford to drink cocoa, because they were quite literally drinking their money.

It’s thought that Montezuma II, Emperor of the Aztecs, was one of the richest people that ever lived, and his fortune consisted of cocoa beans – about 960 million of them! In the Mayan civilisation, cocoa was considered the food of the gods, and was consumed during both marriage celebrations and religious ceremonies.

While chocolate had been such an important part of Aztec and Mayan society for such a long time, it was unknown in Europe until the 16th century. When Christopher Columbus began exploring the American continent, he discovered a great many foods that are now a part of everyday life for many people in Europe, and chocolate was one of them.

When chocolate was discovered and that the taste of it could be improved by sweetening it with honey or sugar, it wasn’t long before the newly-discovered bean began to catch on in Spain. The Spanish kept it their own secret for as long as possible, but it eventually spread throughout the rest of Europe after English pirates discovered it aboard a plundered Spanish ship.

In both France and Britain, chocolate houses sprung up everywhere as a popular place for those who could afford it to meet, similar to the coffee houses that would appear later.

A visual history of chocolate

When did this become chocolate as we know it?

Advances during The Industrial Revolution made it possible to mass-produce chocolate for the first time, and it became available to all classes of society. In the early nineteenth century, a Dutch chemist named Coenraad van Houten invented the cocoa press, which squeezed the fatty cocoa butter from the ground cocoa solids. Van Houten also discovered that adding alkaline salts to powdered chocolate made it less bitter, darker in colour and far more palatable. Without the innovations developed by van Houten, we would not have today’s familiar form of chocolate.

Since those early days, there have been many innovations in the ways chocolate is produced and sold, but at it’s core, it is the same product that became available at the end of the 19th century.

Where is chocolate grown now?

The cocoa “beans” we make chocolate out of are actually the seeds from the pod-like fruit of the cocoa tree, or Theobrama cacao, to give it its Latin name. The tree is native to Central and South America, but it is now grown in several other places around the world. 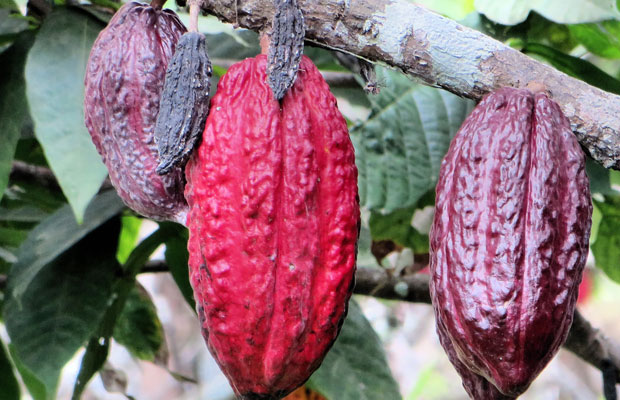 The cocoa tree has very specific needs, which limit the areas in which it can be successfully grown; in fact, it only grows within about 20 degrees either side of the equator, a zone that has become known as the Chocolate Belt. It favours humid, rainy climates with temperatures between 21 and 23 degrees Celsius, and can’t tolerate long periods of dry weather.

The plant is still grown commercially in its native part of the American continent, but has also been spread to the Caribbean, Asia and Africa.

Nowadays, the world’s largest cocoa grower is West Africa, where as much as 70% of the total supply is grown. In particular, Cote d’Ivoire produces more than anywhere else on Earth.

Cocoa pods are not limited to one harvest, and in many places can be harvested all-year-round, where in others there is a long harvesting period which lasts several months. Once the pods have been gathered, they’re cut open to reveal the valuable beans within. The rind is removed, and the beans are laid out in the sun in the fruit’s pulp, which ferments and turns to liquid.

Next, the beans are taken away to be fermented and then dried, which takes from a few days to a couple of weeks. This is an important process for the beans to develop their full flavour. Once finished, the beans are ready to be processed into whatever type of chocolate they’re destined to become, from simple drinking cocoa to one of the three types of chocolate we enjoy in the west – milk, dark and white.

How do we get the different types of chocolate?

Once the beans have been processed, they are roasted, and then the outer shell is removed to obtain cocoa nibs. The nibs are crushed and ground into a paste called chocolate liquor or cocoa mass. In a similar technique to that invented by Coenraad van Houten, chocolate liquor is still pressed today to extract the cocoa butter from the powder.

The main difference is that, nowadays, it is generally done by machine, on a much larger scale. The three main types of chocolate each have their own characteristics, which is a result of the proportions of cocoa mass, cocoa butter and other ingredients they contain.

Dark chocolate is perhaps the most simple variety, and is made from just cocoa mass, cocoa butter and sugar. The total amount of cocoa solids varies from bar to bar, with some having very high amounts, and some countries have their own laws and regulations on what quantities it must contain. Occasionally other flavourings, such as vanilla, are added to give another dimension to the flavour.

Smooth, creamy milk chocolate is the most popular type, and is used in a huge array of different sweets and bars. Similar to dark chocolate, milk chocolate contains cocoa liquor, cocoa butter and sugar, but with the addition of milk. The milk can be fresh, powdered or condensed, and the proportions vary quite a bit, but again this is regulated in some countries. 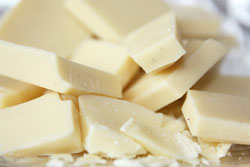 Some people consider white chocolate to technically not be chocolate at all, as it doesn’t contain any cocoa mass. Instead, it is made from cocoa butter, sugar and milk in one form or another. The cocoa butter imparts a chocolaty taste, but not as strongly as cocoa mass does. White chocolate often contains vanilla as an additional flavouring.

Some other types exist, but are not as commonly found. For example, compound chocolate is made from cocoa and vegetable fat as a cheaper alternative to true chocolate, and is often used as a thin coating on sweets and chocolate bars. Because of its composition, it may be legally prohibited from actually being called chocolate. At the other end of the scale, couverture is a form of chocolate with a high cocoa butter content, prized for its flavour and texture. Couverture is mainly used by professional pastry chefs and chocolatiers.

Does chocolate have any health benefits, or is it bad for you?

Although eating too much chocolate might be associated with negative health effects like weight gain, in moderation it is unlikely to lead to problems, and in fact there are a number of health 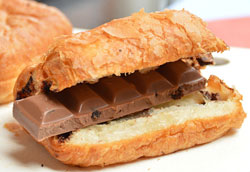 benefits associated with its consumption. It’s important to remember that some of the ingredients added to make chocolate might not be good for you, but in its most basic form, the cocoa bean is a vegetable that has its own range of nutritional benefits. Because of this, some of the positive associations between chocolate and health are considered stronger in dark chocolate with a high cocoa solids content.

Chocolate contains caffeine, which many people believe has a lot of health benefits of its own, as well as its mood-boosting and stimulating properties. Chocolate also contains antioxidants and various minerals in high concentration. It’s associated with a reduced risk of strokes, better circulation and improved memory in older people.

It seems that, as long as it’s not eaten too often in large amounts, chocolate can be very good for you, but to enjoy the most benefit from it, it’s best to stick to types with the highest cocoa content possible.

You may think they are the same thing but they are very different. read on.

How do you make the perfect hot chocolate?

While the ancient Mayans and Aztecs made theirs a spicy unsweetened chocolate drink from cocoa, chilli and water, the modern palate tends to prefer something sweeter, smoother and more akin 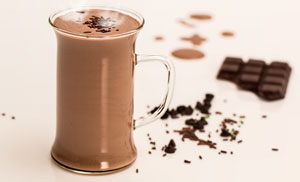 to the bars of chocolate we’re used to eating. Instead, try these tips to make the perfect hot chocolate.

First, get hold of the best quality dark chocolate you can find, with cocoa content of 60-70%. Heat about 450ml of milk in a pan, and add 100g of the chocolate, broken into small pieces. Keep heating and stirring until the chocolate has melted into the milk, and taste it. For many people, this is the perfect combination of richness and sweetness, but if you prefer it sweeter then add sugar to taste. Bring the hot chocolate just to the boil, and then take off the heat. Top with whipped cream and marshmallows to really finish it off.

Images to make your mouth water!

Your Kitchen Stories & Advice
The home of tomorrow
The great big English breakfast
The Origins of Tea
Tags:historywhitechocolatemilkdark